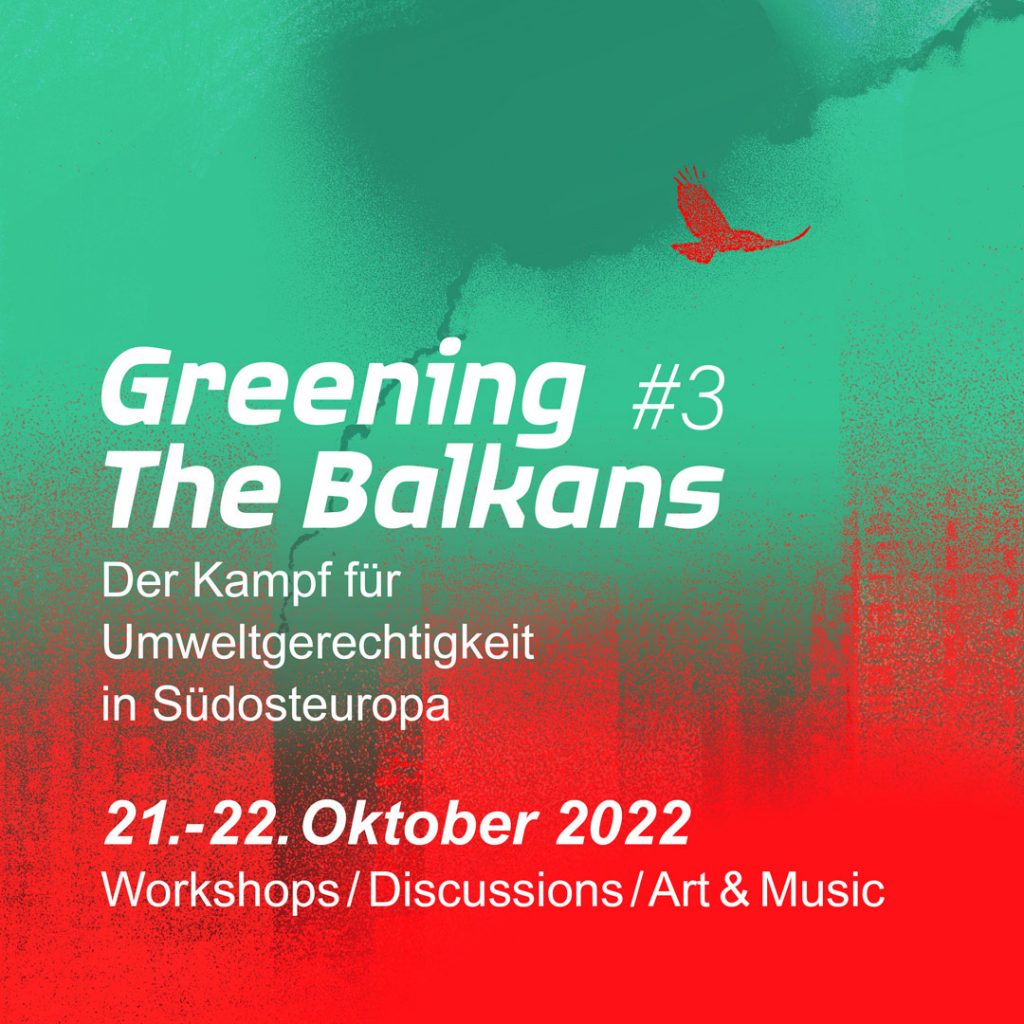 In recent years, strong environmental protests have formed in many countries in the Western Balkans. They are directed against increasing air pollution, the construction of hydropower plants, open landfills, industrial contamination, or nature-destroying mining. One example is the protests against the lithium mines planned by Rio Tinto, which saw thousands of people take to the streets across Serbia at the end of 2021. In discussions with environmental activists from the Balkans, we want to learn more about the background of these protests and initiatives and bring them into conversation with activists from the Munich environmental and climate justice movements and the broader urban society. What are their goals, what are their chances of success, and what role does the topic of ecology and environmental justice play in strengthening the young democracies in the region? What are the impulses for environmental (justice) initiatives in Munich and vice versa?

In this workshop, environmental experts and activists from the Balkans will meet those from Munich. They provide insight into their work and discuss best practice projects together. The thematic blocks of the discussions (in English), which are explicitly open to a larger audience from Munich’s urban society, range from „Urban Space & Environmental Justice“ to „Just Energy Transitions“ and „Activism between the local and the global“ to „Campaigning Insights: Climate Change & National Parks.“ The program also includes an air particle sensor workshop, a final panel discussion, and various artistic performances that deal with the environmental justice issues discussed at the workshop in a performative manner.

Participation is free of charge (donations are welcome). Since the number of places is limited, please register in advance by e-mail: &

Find out more about the Art-ivism Program >>

In the course of the 20th century, intensive urbanization took place in many countries of the world. More and more people were drawn to the cities, more and more goods flowed into the urban centers, industries and large technical infrastructures emerged. Toxic side effects such as air and water pollution and noise pollution were distributed among certain social groups as unevenly as the prosperity that resulted from this mobilization.

Local pressures on people and the environment, but also the climate crisis and increasing social inequality are forcing us to rethink our cities. What can a green city look like? How do we imagine urban mobility? How do we want to live? How can we work together to make urban spaces worth living in?

The consequences of fossil energy production from coal, gas, and oil affect us all, and yet some regions suffer more from this old energy regime and the resulting climate change than others. It is not only in the Global South but also in the countries of Southeastern Europe located on the “European periphery” that air quality limits are being systematically breached, and even new coal-fired power plants are planned. They produce electricity, a significant part of which is also exported to the EU. This practice raises pressing questions about environmental justice.

What are the keys to the fight for a just energy transition that reduces emissions while keeping social transformation in mind? What role do environmental monitoring, citizen science, and citizen initiatives play? What regulations and instruments do we need to establish sustainable energy regimes?

“Activism between the local and the global”

With Fridays For Future, a new climate movement has emerged in recent years that thinks globally thematically and has also built up a worldwide network in terms of organization. At the same time, local involvement and actions still seem to be the key to success, as numerous initiatives in the Balkans and Germany have shown in recent years.

What defines successful environmental justice activism? Which organizational, political, and legal levels need to be mobilized, from local to international? Are local successes more likely to provide an impetus for transformation processes at a higher level, or do international/national initiatives impact local successes?

Organizing broadly visible and successful campaigns requires clear messages, an extensive network, patience, and often strong images and stories. We talk to organizers from the Balkans and Munich about their experiences, the most significant challenges, and successes.

Plans for hundreds of new hydropower plants threaten the Balkan river systems, which are considered unique in Europe. Eco Albania reports on international cooperation and local actions as part of the Europe-wide „Save the Blue Heart of Europe“ campaign, which aimed, among other things, to make the Vjosa River the first European „Wild River National Park.“ Fridays for Future has experienced tremendous growth as an organization in recent years. What started as a weekly protest by a single student grew into an international movement that in 2019 managed to mobilize an estimated 2 million people worldwide for the „Global Climate Strike.“

For more than 24 years, balkaNet e.V. has been an open forum for culture, art, and science from and about Southeastern Europe. Every fourth Saturday of the month, we organize events at the Glockenbachwerkstatt for an active „get-together“ – the Ming(R)a Lounge. As an organization, we have set ourselves the goal of promoting new impulses for artistic and socio-cultural exchange between Southeastern Europe and Munich. The shared desire to promote diversity in the city includes the participation of all, and is a source of new perspectives and networking opportunities. The „Greening the Balkans“ series is supported by the Glockenbachwerkstatt, Zukunft gestalten in Bosnien e.V., and MIKADO Umdiewelt.